Here's a break in my temporarily relentless series of commercial posts.

After Mike and I went to see the Masters of American Comics exhibit in New York (and Newark) this January, we went out to dinner in Chinatown with our pal Jon Lewis. The restaurant where we were eating was advertising (on one of their menu boards) something that looked to all of us like "CRISPY COCONUT MIKE."

Probably that was supposed to be crispy coconut rice, or something like that, but Mike took a photo of it, and it clearly says "CRISPY COCONUT MIKE." No doubt about that; no ambiguity.

We were feeling drawy after looking at all those great cartoons, so within minutes our napkins and Sharpies were ablaze. Here's what Mike came up with: 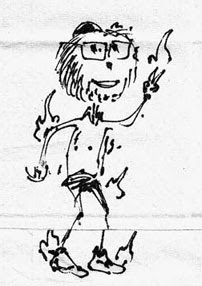 I had imagined something a little different -- a dish made from dusting Mike with dried coconut and deep-frying him -- so I retorted with a Crispy Coconut Isaac: 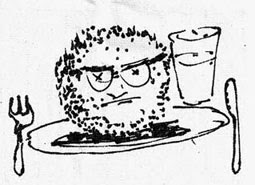 ADDENDUM: Mike sent me the photo in question, which you also will get to see: 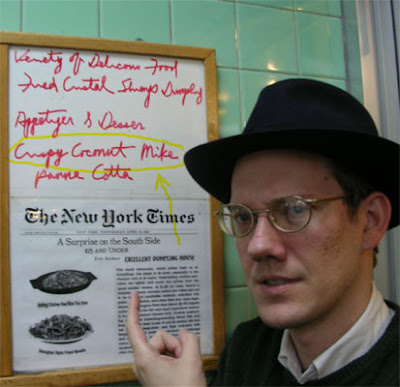 Now I'm thinking that the sign was supposed to advertise "crispy coconut milk panna cotta," which sounds kind of good. But that's definitely a Mike and not a milk, there, am I right?
Posted by Isaac at 3:16 PM

Readers of our sketchbook project Demonstration may see echoes of my demon #13, another scrawny creature made of plant matter that's partly on fire. Something about spindly wooden limbs makes me thing about kindling, I guess. (#13 can be viewed in the Optical Sloth review of our work--just updated with some kind words about SatCom #7! Link awaits on the right side of the blog.)