Every issue of Elm City Jams has contained a few pages of Shuffleupagus, a cartooning game invented by our pal Jesse Reklaw. It's easier to play than to explain, but let me try:

Technically, you need five people to play, but we've done it with four and even as few as three. You'll also need your drawing gear and a supply of blank cards.

(I've heard of people playing with 3" x 5" index cards, but we use 2.5" x 4.125" pieces of bristol board, because those will compose into the right dimensions for a standard mini page at the end, and because bristol board is nice and sturdy.)

To get ready to play, each cartoonist should take two blank cards and draw one character and one setting. We tend to orient the characters vertically and the settings horizontally: that gives more room for details in the settings, and it gives room for a full-body sketch for the character.

Here's a bunch of settings from out of our deck, by me, Tom O'Donnell, Mike, and Tom Hart: 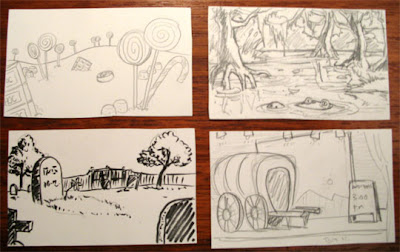 ... And here's a batch of characters, by Mike, Tom O'Donnell, myself, and Mike again: 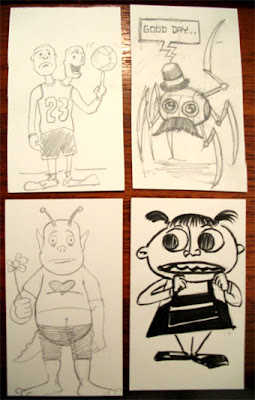 (It's important to draw all of the character, since you'll want details like the shoes or hooves to be consistent. It also helps if your drawing suggests a personality, either by appearance or gesture; you may also want to indicate scale, or to discuss it with your fellow cartoonists later, before you start drawing.)

Then you collect two stacks of cards and shuffle each. Now you're ready to play.

1. Pick one character and one setting. (If you have five people, the person who designed the character can sit out for the first part.) So you might have something like this: 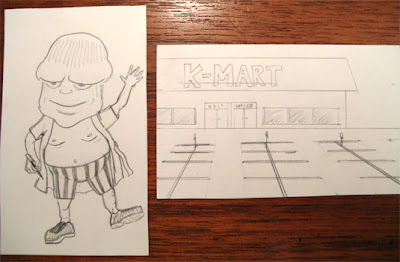 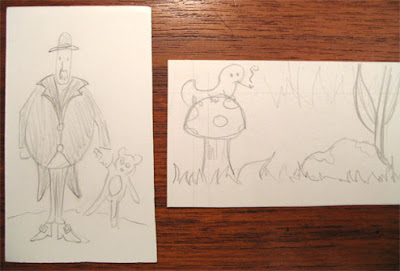 2. Each person then gets a blank card and draws the character doing something in the setting: 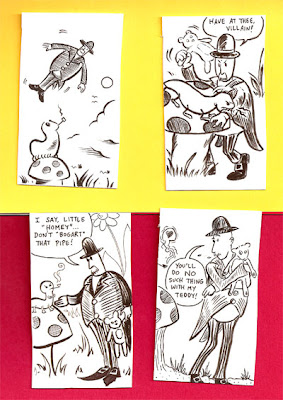 3. These four images, when they're inked, get shuffled into a "deck" of five, with a card that's marked "start / end." (Here's our battle-scarred start/end card:) 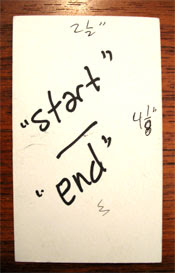 4. Now you need five people to play the second part of the game. Everyone gets another blank card.

5. If all five people can sit around the same table, then deal the five-card deck into the spaces between them. (This is the part that's easier to do than to explain.) Whoever has the "start/end" card on his left is going to draw the first panel of the strip, and the strip reads around to the right from there: 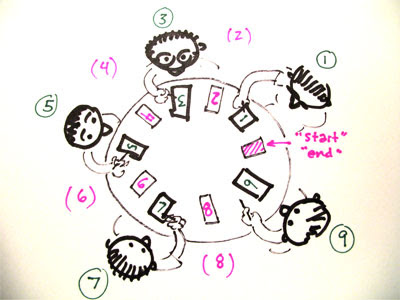 Another way to think of this is that the four cards you drew in the first round are getting placed into the even positions of your nine-panel grid, like this: 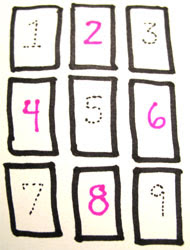 And the task of the second round is to connect these four panels into a story, or at least into a coherent sequence. In-betweening can be a challenge, especially if the characterization (or costume!) isn't consistent in all four panels, but that's part of the fun.

Here's a finished product, visible for the first time. This is the Shuffleupagus page that Mike and I did with Adam Rosenblatt and Ben Towle right before SPX in the fall of 2006. (This will appear in a fourth issue of Elm City Jams if there ever is one.) You can, as usual, click on this image to bring it up to legible size. 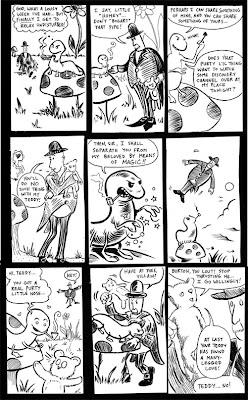 It's interesting to imagine what this little story would have looked like if the initial four panels had dealt out in a different order. (In-betweening from my panel 2 to Ben's panel 6, for example, would have been pretty easy, in a different story.)

If you found my explanation confusing, here's a link to another description of shuffleupagus by a different cartooning group. Ben Towle's "Three-Cent Pup" drawing group down in Winston-Salem seems to be having a good time with the game, too: here's a link to one of their shuffleupagus jams. You'll notice that the Three-Cent Pup folks don't limit themselves to nine panels.

It's a fun game, and if you know a few cartoonists, I suggest you try it out!

When I re-read that jam, one thing I really noticed is how consistent
lettering really ties things together. I've done some Shufflepagi with various groups--kids comics classes, our local comics group, etc.--and I'm thinking next time we should get a volunteer to do the final lettering.

Yeah -- I probaly should have mentioned that everyone left their lettering in pencil so I could letter the whole thing.

I do that with all of the pages in Elm City Jams, for exactly the reason you mention. Consistent lettering in a strip helps the reader to imagine continuity from one panel to another, even if the art changes quite a bit.

That's a simple step that a lot of comics jams could profit from, really: have a single final letterer.

Absolutely fascinating! This non-cartoonist wonders if there are other cartooning games?

Your description vaguely reminds me of a game poets play, only the poets include betting with little glasses of whiskey. When played well, no one remembers the rules afterwards.

Your blog is terrific.

I know of a game, sometimes called "Eat Poop You Cat" (you can find it by googling that phrase, and here is the wikipedia entry) that relies on cartooning, but I haven't played it yet myself.

It has struck me, though, that between cartoonists and poets, that game might be put to more serious use. I have been toying with the idea of starting a project around that, but I haven't gone far with it yet. I need to find a few more poet-cartoonists to make up a chain of collaborators.