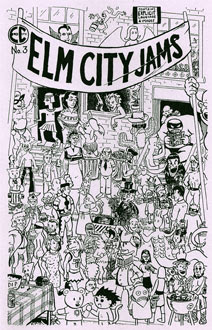 In the third issue of Elm City Jams, apparently just to make things more difficult for ourselves, we added a new complication to each of our one-page jam strips: every page would begin with a title drawn at random, as before, and a formal constraint drawn at random from a different deck.

Some of these constraints were straightforward (if vexing), like a requirement that every panel run the full height of the page, or a requirement that the panels be shaped like something important in the panel. Some of the other constraints were more baroque, like the one we used in "Draculina vs. Wolf Lady," where each caption was written and obscured before the accompanying panel was drawn (without knowing what that panel said).

In "Kirby Speaks Through Ouija," the constraint was that we had to make use of Matt Madden's Exercises in Style, so the strip swipes each of his panels, though in the opposite order. Here's the middle tier: 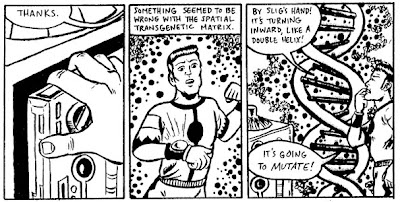 Probably my favorite strip in this book is "Because of This, I Cannot Love," a sort of tribute to Lewis Trondheim's Mr. O. You'll certainly need to click on this in order to read it -- the panels are tiny -- but please come back when you're done. 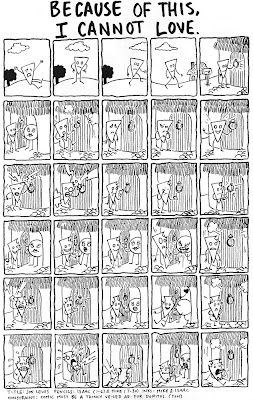 The constraint, here, was that the comic had to be a thinly veiled advertisement for Doritos.

We seem, in this issue, to have added a liberal dose of blasphemy to our regular mix of profanity and scatology, so if you're offended by that sort of thing, you might want to steer clear of Elm City Jams #3. On the other hand, if you have room in your heart for jokes about crucifixion, click on this image to enlarge it. It's one of our best shuffleupagus pages, featuring a little fish-boy designed by Jon Lewis. 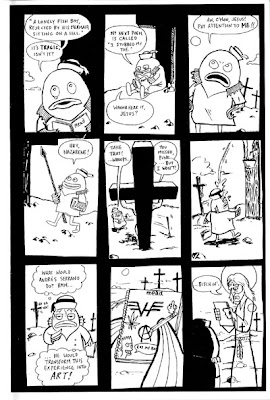 The whole book is full of our typical weirdness -- the sense of humor one reader has called "random and stupid" -- and in ECJ #3 you can find Egyptians fighting Hapsburgs, Death Metalca and the Apocalypse Peavey, a knight with a monkey on his arm, a monologue by Shakespeare's Iago, a nonchalant indy ninja turtle, Ape-Day, a strip about our ECJ hazing rituals, and the Venerable Bede in underoos (hello, search engines!).

The inside back cover offers a mock tutorial on building this sort of craziness, which resulted in three characters we love dearly but have yet to use in an actual comic: 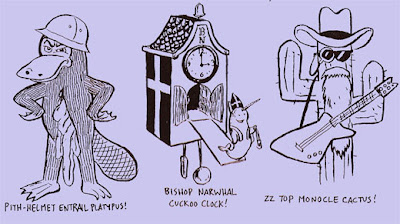 Contributors to this issue inclue Tom O'Donnell, Jeff Seymour, Shana Mlawski, Harry Dozier, and Mike and myself. As usual, it's a 20-page, hand-stapled, digest-sized minicomic, and you can have it for $1.75 if you use Paypal, $1.50 if you use a check, and $1.00 if you get it from me in person. Here's that fancy Paypal button you've been waiting for: