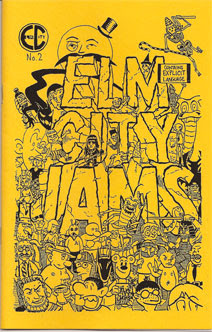 For our second issue of Elm City Jams, we pulled in a few ringers: we held one of our jam sessions in Brooklyn, and got Jon Lewis, Tom Hart, and Bill Kartalopoulos to add to the usual insanity provided by Tom O'Donnell, Jeff Seymour, Mike, and myself. Linnea Duvall joined us for a later jam back in New Haven.


If the first issue of Elm City Jams was a promising idea, this issue really delivers on that promise. I think it's the funniest single issue of any comic we've published. Even now, three years later, some of the strips still make me laugh, and as I was looking through this issue to try to summarize it, I was surprised at how many high-quality strips are packed into its twenty pages. When a customer at the MoCCA Festival asks for something humorous, this is the book I put into his or her hands -- unless the customer is a kid, because, like all issues of Elm City Jams, this one contains explicit language and images.


In lieu of trying to explain the contents, I have put together a little montage of panels, mostly taken out of context. Please click on this image to make it legible. It's worth a click.

You're looking at panels from "The Devil's Avocado," "Halliburt 'n' Ernie," "Damn Tree-Hugging Robots," "Don't Mess With Hexes," a shuffleupagus page featuring Skele-Tut, "Jared Fogle Kills a Prostitute," another shuffleupagus page, and Suge-Sodee, the Sugary Sodas Giant, in "A Man Who Needs No Introduction." (I'll write another post about shuffleupagus some time, though it was invented by Jesse Reklaw and we can't take the credit for the idea.)

The book also includes (not pictured) Alkibiades and his Randy Pals in "Bibulous Sophistry," the adventures of "Hezekiah Sugata, Hillbilly Shogun," some rapping by M.C. Baldeaglehead, parodies of Star Trek and Keiji Haino, and a strip so strange it could only be called "Penny Sandwiches."

If you have this comic, I think you will be impressed with the variety and peculiarity of the strips, and with their generally high level of success as jams. (It'll often be difficult to tell where one cartoonist stopped and another one picked up the page, which is part of what we aim for with our jams.)