Elm City Jams is a side project that emerged when we got together with some of the other cartoonists we knew in New Haven (the Elm City) to do a little bit of drawing together. The word "jam," applied to comics, refers to a comic in which more than one cartoonist has been "in charge" of what happens in the story, because they've been drawing on the same page without discussing an advance plan for what will happen. If you've read our Treatise Upon the Jam, you know that we have some ideas about this kind of collaboration, about its usefulness, and about how it can be done well or done right. Most jam comics are fun to make but a little tedious to read. Elm City Jams, on the other hand, has been praised by a number of readers for making jam strips that actually "work."

Part of our secret is that each of us really tries to bring his best abilities and his best game to the jam. We also make a real effort to "play well with others" while we're doing this stuff. For instance, here's the conclusion of "Fame and Fortress," the first strip in the book, where (in these panels) I inked Tom O'Donnell's pencils of my script idea. I daresay neither of us would have come up with these particular images on his own: 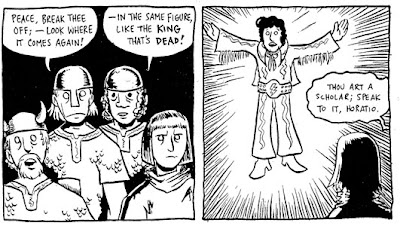 Another part of our secret in Elm City Jams is that each of the one-page strips starts with a title, drawn at random from a batch of titles we generate before the drawing session. (That's something I borrowed from Scott McCloud's "Quanto Comics," which he discusses here. Don't fill out the form, though: I'm pretty sure that McCloud's Morning Improv is on hiatus.)

Because each strip has a title before it begins, there are some narrative parameters and a vague bit of direction about where it might end; the strip can't wander at random. Since each strip is only one page, it can't wander for very long, either. If you want to try a jam comic with some cartoonists you know, I strongly recommend setting limits like these: if a jam is a game, these are the out-of-bounds lines that let you know where the playing field is.

It's hard to pull an example from this issue for general consumption, because (like the other issues of ECJ) this issue definitely contains explicit language and images. Here's a relatively sanitary one (with only some gruesome cartoony violence), so you can get a sense of how they hold together: 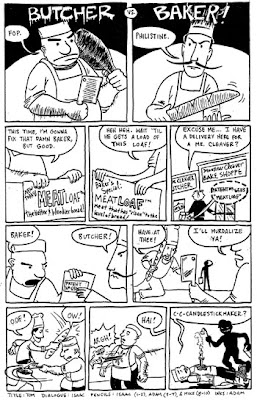 That's a title by Tom, with dialogue by me, and pencils by me (2 panels), Adam Rosenblatt (5 panels), and Mike (3 panels). Adam did the inking and I did the lettering. You can click on the picture to enlarge it, as usual.

Elm City Jams #1 is 20 pages, and it features the Tin Slacker, an ogre in a bikini and a bowler, M.O.D.O.K., the bumblebee Clint Eastwood, Emily Dickinson, a valkyrie, Ted and Alphonse with Charles Manson's jellybeans, the goddess Bast, and a naked man in a moose mask. Contributors are the two of us, Adam Rosenblatt, Tom O'Donnell, and Jeff Seymour. Like our other early minis, it's $1.75 by Paypal, $1.50 by check (email me for mailing information), and $1.00 in person. Again, it contains explicit language and images. Here's the button:


Also, just for a treat, here's the portrait of Mike and me from the contributor-profile page: 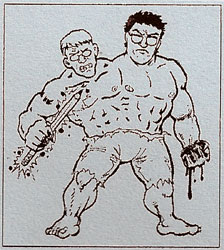